Why Does Father Christmas Wear Glasses? 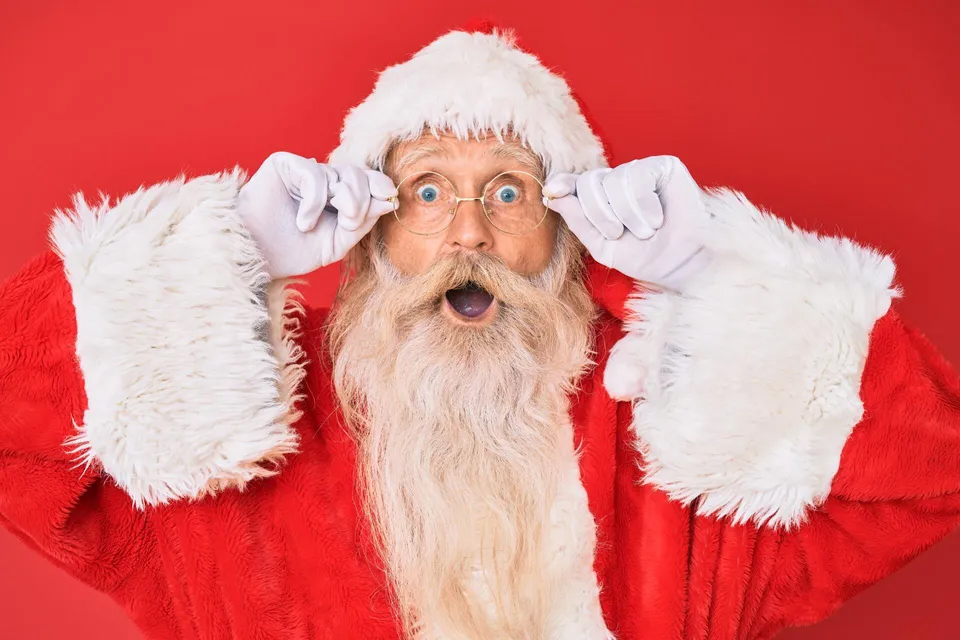 Father Christmas isn’t portrayed as a young man so most people might be forgiven for thinking that he needs his old faithfuls to read what all the boys and girls have written on their Christmas lists. After all, he can’t just rely on the elves to do it for him, but there are other very good reasons the grandfatherly gentleman who is the symbol of seasonal generosity might need his specs.

A Little Bit of History

Father Christmas has not always worn glasses. The figure we know and love today is a relatively recent adaptation of the original St Nick who died in 343AD at the ripe old age of 73. He of course had nothing to help him see at the time, as eye tests and eyewear had not been invented. The depiction of a red and white coated man with the snow-white beard we know today was conjured up between the years of 1863 and 1886, thanks to Thomas Nast, an American German-born artist. Nast was commissioned to come up with images of the festive fellow for Harper’s Weekly magazine and there were 33 in total over the years.
In the century to follow, eye tests became available and eyewear became much more commonplace on the more mature lady and gentleman and so a wire-rimmed pair was deemed a natural complement for the distinguished grandfatherly Santa. We are all very familiar now with the thousands of representatives around the world of Father Christmas who sport the eyewear accessory before heading out on their sleighs or to their grottos to welcome the visiting children.
Question: Are the glasses just a prop or could St Nick actually need them?

What Could Be Wrong with His Eyes?

Presbyopia
This is a condition that affects the older generation and causes farsightedness. It is a common and gradual deterioration in eyesight. A client of ours may present with vision graded at 20/100 rather than the optimum 20/20. This means that their vision would be similar to a person with 20/20 vision reading a chart from a distance of 100 feet away. A prescription of 20/200 actually equates to the legal definition for blindness.
If presbyopia is why Father Christmas wears glasses, he will no doubt need to remove them for reading the children’s lists but will more than certainly need them to avoid crashing his sleigh.
If you suspect your eyes are suffering from this extreme long-sightedness, then come and see us for an eye test at David Paul Opticians.

He Needs Reading Spectacles
Many Father Christmases out there working over the festive season have to deal with little children handing them carefully written and much treasured little notes and it is so important that they can actually read them. This is why lots of them wear prescription glasses. Unfortunately it is a fact that the older you get, the more likely you are to struggle with reading text that is close to you.
Reading glasses can be purchased online and in shops and you can even get Santa specific ones, but if you want an attractive and reliably good pair that accommodates your specific needs, book in for an eye test at David Paul Opticians.

Santa Needs a Prescription
Maybe Father Christmas wears specs because he has always had poor eyesight. A large percentage of the population have a condition known as myopia (meaning you can’t see things far away from you without them being blurry) and so you need corrective eyewear; the bearded gentleman we see every year at this time may be no exception.
Our advice is to see your optician for eye tests regularly and stay on top of exactly what you need to keep your eyesight the best it can be.

What Kind of Glasses Suit Santa?

Sometimes you might spot a rose-gold pair or a pair that are more oval in shape but, in general, Father Christmas suits the small rounded spectacle with the gold wire rims.

Should He Change his Look?
Despite the deep-rooted tradition, things do change and we wonder what Father Christmas might look like if he decided to revamp his eyewear style and take on a more modern fresh look. After all, Mr Claus is no exception when we consider how everything we are exposed to evolves over the years. He will always no doubt cling to his iconic red and white coat and keep his fabulous snowy white beard, but images of him boasting a more modern appearance do creep in every year, be it in the media, on films or on cards.
Giving the distinguished gentleman an image that the younger generation can relate to strengthens his appeal and maintains his credibility. It avoids awkward questions to parents and keeps his image one that children young and old can believe in. The perfect alternative look could be in the form of an accessory such as a pair of designer glasses. It wouldn’t diminish his image as Father Christmas but it would be a subtle change to show all the boys and girls that he is keeping up with the times.
We would like to invite Father Christmas to come and see our experts at David Paul Opticians for his next eye test. We would love to advise him on the best eyewear to enhance his look and help him adopt a fun, funky, or simply more modern demeanour.
Our extensive range has something to suit everyone. We know he wouldn’t want to lose his endearing and widely loved traditional aesthetic but that is not to say he can’t change his look with a beautiful pair of designer glasses.